Prepared on behalf of the Pardon and Commutation Reform Coalition, a coalition of 11 immigrant rights and criminal justice reform organizations, the memo details nine primary recommendations aimed at ensuring that the implementation of AB 2845 meaningfully serves those applying for pardons and commutations. These include the establishment of clearer guidelines, timelines, and accessible resources for applicants; the creation of an independant pardon and commutation commission; and re-submission of applications to the California Supreme Court that were rejected without justification. 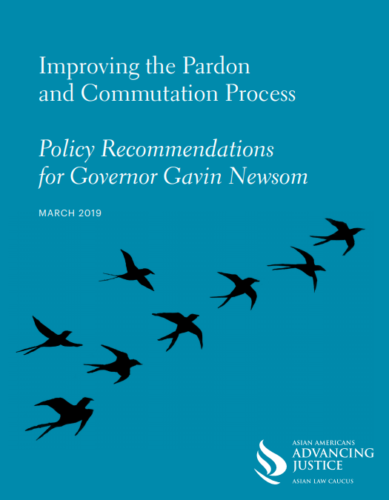 “AB 2845 is extremely necessary and long overdue,” said Ny Nourn, Yuri Kochiyama Fellow at Advancing Justice – Asian Law Caucus and co-author of the memo. “Now that the bill has been passed, it’s essential for Governor Newsom to ensure that the law is implemented in a way that actually helps those who need it.”

Clemency opportunities are invaluable for those serving Life Without Parole (LWOP) and Life sentences, as well as one of the only possible avenues to prevent deportation for many immigrants. Under former Governor Brown, the role of executive clemency was expanded to recognize the harm caused by the mass incarceration crisis and to underscore the value of redemption and rehabilitation.

“Governor Newsom has the opportunity to leave his mark on California’s criminal justice system early in his term,” said Angela Chan, Program Manager and Senior Staff Attorney for Advancing Justice – Asian Law Caucus’ Criminal Justice Reform Program and co-author of the memo. “Immigrants and immigrant rights advocates across the state and country are watching to see if he will continue to build on his predecessor’s legacy.”

“Real reform is attainable if we act with intention,” Sarah Lee, Community Advocate for the Criminal Justice Reform Program at Advancing Justice – Asian Law Caucus and co-author of the memo, added. “We all have a stake in ensuring our society is rooted in forgiveness.”

You can find a copy of the memo here.

Asian Americans Advancing Justice – Asian Law Caucus was founded in 1972 as the nation’s first legal and civil rights Asian American organization. Recognizing that social, economic, political and racial inequalities continue to exist in the United States, Advancing Justice – ALC is committed to the pursuit of equality and justice for all sectors of our society, with a specific focus directed toward addressing the needs of low-income, immigrant and underserved Asian Americans and Pacific Islanders.

The Trump Administration has weaponized immigration law to target communities of color. The expanded Muslim Ban goes into effect today with little regard to the real life impact of families across the country. #NoBanAct #NoMuslimBanEver bit.ly/32dgoTp ... See Less

'Trump is deciding who is American': how the new travel ban is tearing families apart

God this administration is so horrible smh so sad for families