Criminalizing the Next Generation: A Report Back from #FergusonOctober on How Young People are Leading the Way

Yesterday, October 22nd, marked the 19th Anniversary of the National Day of Protest to Stop Police Brutality, Repression, and Criminalization. Throughout the country, actions took place to demonstrate resistance to police violence. Earlier this month, I traveled to Ferguson, MO as part of a National Weekend of Resistance that brought to life the very goals of October 22nd.
Local activists and grassroots organizations called on the nation to stand in solidarity with their resistance struggle and to ensure the world witnessed what was happening in Ferguson. Young people in Ferguson have been fearlessly confronting a militarized law enforcement that has deployed tear gas, rubber bullets, curfews, and ruthless tactics to repress their grief and frustration. 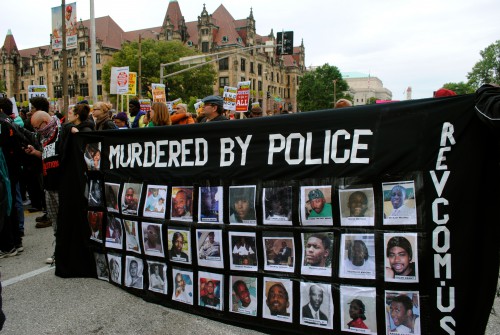 I saw thousands of activists and community leaders from around the country descend upon Ferguson and come together with community members who have been on the frontlines to demand justice and accountability. What was most striking, however, was the relentless push coming from young people who have emerged as the new leaders of this movement. Youth of color, particularly, black youth, have come together with a deep analysis of how different forms of oppression are connected and are using this to guide their actions.
The youth leaders illustrated that the murder of Michael Brown, and countless others, is part of a larger continuum of systemic racial profiling, brutality, and injustice. On #MoralMonday, a day devoted to direct action, organizers shut down three different Walmart stores in the greater St. Louis area in solidarity with the Ohio murder of John Crawford. By including these actions in a weekend that largely focused on local deaths, it helped to bring to light the national scope of police violence.
During the same weekend of resistance, on an evening mass meeting hosted in the tradition of the civil rights movement, a panel of interfaith leaders were slated to speak about the movement and emergence of youth leadership. On the panel, however, very few local young people were invited to speak. Nevertheless, local youth spoke up and took over the stage to demand that their voices be heard. Youth of color have made it clear that they are not content to sit on the sidelines while an older generation speaks for them; they want to be recognized for their resistance in the streets, while honoring the legacy that was laid out by those who challenged similar issues of institutionalized violence in the past. 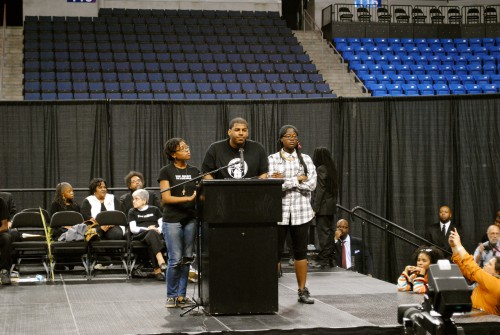 We must let the spirit of young people in Ferguson guide our work, wherever we live, in fighting against police violence and repression. Now is the time to act. Now is the time to not be silent.
*For more information on #FergusonOctober please visit their website.

The 2020 Census is just around the corner! Learn how the census will impact your community’s funding, resources, and political representation for the next ten years.