*This article originially appeared on Medium on November 18, 2015

The Mediterranean has drowned thousands of Syrian refugees, but now they face another threat: a tidal wave of American politicians vowing to oppose the re-settlement of Syrian refugees in the United States after the terrorist attacks in Paris. Governors, members of Congress, and others have argued that all refugees from Syria must be stopped because it is supposedly impossible to distinguish Syrian refugees from potential terrorists.

As a Syrian-American it is impossible not to take personal offense at such overt racism. But we should all be alarmed by such calls. They re-produce the bigoted logic used against Japanese-Americans during World War II which ultimately led to the mass incarceration of 117,000 civilians.

We can’t tell them apart 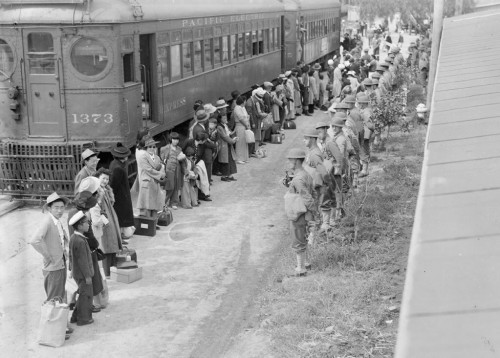 Persons of Japanese ancestry from San Pedro, California, arrive at the Santa Anita Assembly center in Arcadia, California, in 1942. (NARA)

As historian Peter Irons has documented, government lawyers who contemplated mass internment of Japanese-Americans in the wake of the Pearl Harbor attack reasoned that,

[s]ince the Occidental eye cannot readily distinguish one Japanese resident from another, effective surveillance of the movements of particular Japanese residents suspected of disloyalty is extremely difficult if not practically impossible.

Military leaders argued that all Japanese-Americans had to be detained because “racial differences” meant that “[t]heir mental and emotional responses are understood by but few of our people….”

There were dissenters within the government, but they lost the battle.

The premise that there was no way to tell Japanese-Americans who posed a threat apart from those who did not sounds shockingly similar to the attitudes many politicians have expressed about Syrian refugees today.

In the 1940s, the Supreme Court endorsed the differential treatment of Japanese-Americans based on their race alone. But since then, generations of Americans, including judges, scholars, and politicians, have condemned those decisions — and a Congressional commission concluded that the government’s actions during World War II were not based on legitimate security needs, but rather, “race prejudice, war hysteria, and a failure of political leadership.”

So it is disturbing to hear similar logic today. David Bowers, the Mayor of Roanoke, Virginia, even cited the internment of Japanese Americans as inspiration for his present-day call to stop Syrian refugees.

To come to the United States, refugees already must undergo thorough background and security checks, often delaying their applications for years. There is no reason to think the process is inadequate from a security perspective, though it leaves much to be desired for those fleeing terror and persecution.

We cannot let “race prejudice, war hysteria, and a failure of political leadership” become more entrenched in Washington and across the country after the Paris attacks. That a political leader in 2015 is willing to hold Japanese Internment up as a shining example of American national security policy should be a clarion call for action.

Millions have already fled Syria because the violence felt in Paris last weekend became their daily reality. It made life there impossible. Before we adopt new bureaucratic hurdles that do not improve security and will close the door to refugees from Syria and other countries, we should keep in mind that, for refugees, our government’s decisions are often a matter of life and death.

Here’s what you can do

4. Sound off on Social Media:

Open the doors to refugees! We won’t be consumed by fear. #LiftMyLamp #SyrianRefugees Sign the petition today bitly.com/liftmylamp

Roanoke Mayor doesn’t speak for me, or millions of other Americans, who support Syrian refugees. #NeverAgain9066 http://bit.ly/1j8dPcR