It has been three years since Arab, Middle Eastern, Muslim and South Asian community members joined forces with 79 civil rights and community organizations to pass the Safe San Francisco Civil Rights Ordinance in June 2012. The Ordinance requires San Francisco police officers who work with the Federal Bureau of Investigation’s Joint Terrorism Task Force to follow San Francisco and California laws that protect against racial and religious profiling and intrusive violations of privacy.

Like all laws, the Ordinance’s strength lies in its enforcement. In the world of murky FBI practices against AMEMSA community members, the first step to ensuring compliance with the Ordinance is transparency through its mandatory annual report.

In 2013, San Francisco Police Department (SFPD)’s first “report” took the form of a 2 minute oral presentation to the police commission, causing outrage and a sense from the community that the Department was not taking the Ordinance seriously. As a result, SFPD was forced to present its report in written form, and each year since, the community’s focus has been on the substance of the written report. To its credit, the Department has improved the report each year in response to community demands.

On Wednesday February 4, 2015, SFPD presented the third annual Safe San Francisco report for the 2014 year at a public hearing of the San Francisco Police Commission.  Unlike the 2012 and 2013 reports, the 2014 Ordinance report provides more information for community members to engage with SFPD about what their officers are doing with the FBI. Under the Ordinance, SFPD has been made to disclose more information about its collaboration with the FBI JTTF on an annual basis than any other local police department in the country. We now know how many San Francisco officers work with the FBI JTTF, how many hours they work, what types of tasks they do, what kind of tips they follow-up on, what their command structure is, how their salaries are paid, and that they and the FBI are trained quarterly on San Francisco and California’s legal protections for privacy and against racial and religious profiling. Furthermore, SFPD told the police commission that its officers do not participate in some of the more troubling aspects of the FBI’s engagement with AMEMSA community members, such as “voluntary” interviews and intelligence gathering in the guise of community outreach, which is experienced by individuals as a form of harassment that undermines community trust.

According to the 2014 Ordinance report, there have been no violations or possible violations of the Ordinance. But questions remain.  During public comment, a speaker from the Council on American-Islamic Relations told the police commission about a client who was questioned by a San Francisco officer working with the JTTF about a Freedom of Information Act request he had filed, a form of questioning that might be inappropriate under the Ordinance. Furthermore, on his LinkedIn account, the SFPD officer described himself as a JTTF member—a fact that calls into question SFPD’s refusal to name its JTTF task force members in the annual report on the basis that it would put officer safety at risk.  Finally, CAIR’s story appears to contradict the 2014 Ordinance report’s claim that SFPD officers at the JTTF did not interview AMEMSA community members last year.

Another troubling aspect of the 2014 Ordinance report is its reference to the Suspicious Activity Reporting program.  The Caucus testified to the police commission that SAR reports are precisely the kind of surveillance practices that result in racial and religious profiling of AMEMSA community members, thanks to lax standards classifying innocent activity as ‘suspicious.’ We called on SFPD to be more transparent about its SAR program by disclosing records to the public as other departments have done. 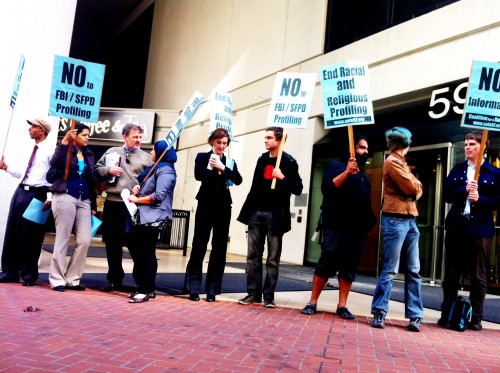 Finally, the Caucus also expressed concern about recent guidance on racial and religious profiling from the U.S. Department of Justice, which creates a loophole for profiling of AMEMSA community members in the name of national security. The Caucus asked SFPD to pressure the FBI to participate in future public hearings to respond to the concerns of AMEMSA community members.

We plan to follow-up on the 2014 report in several ways. First, we’ve asked SFPD to update the 2014 Ordinance report in writing with some of the additional information provided orally at the commission hearing (some of these were answers to questions the Caucus was able to pose because the Department shared an advance copy of the report). Second, we will do everything possible to determine whether an Ordinance violation may have occurred with regard to CAIR’s client, and ask, if so, why the Department failed to identify it in its annual report. Third, we will continue to press SFPD on its involvement in the SAR program and on its ongoing cooperation with the FBI despite concerns about loopholes in the federal government’s racial and religious profiling rules.