Tech has fundamentally changed the San Francisco Bay Area. Yet among the industry’s innumerable trailblazers, there are unique individuals who look deeper into the Bay Area communities where they reside in and strive to make a deeper impact.

Evan Tana is one such individual. A tech entrepreneur, investor, and major donor with Advancing Justice – ALC, Evan currently invests in early stage startups. Prior to investing full-time, Evan was part of the Dropbox product leadership from 2016 to 2018.

Evan began his career at Digital Chocolate, a publisher of mobile games, and Loopt, an early YCombinator startup that launched a ground-breaking social mapping service that was one of the very first apps featured prominently by Apple. In 2009, Evan was part of the founding team at shopkick. He served as Vice President of Product Management until 2012 before joining Greylock Partners as an Entrepreneur in Residence. In 2013, he founded Sparks Mobile, a startup with the mission of connecting people through their common interests and shared storylines. Sparks Mobile was acquired by Dropbox in 2016.

In Spring of 2017, Evan worked with our development team and the Dropbox Employee Resource Group on an event to increase awareness and galvanize the tech sector on the critical issues affecting immigrants and refugees, such as ICE raids and the Muslim Ban. The event titled Awakening our Community in Troubling Times attracted more than 100 guests from tech including Google, Adobe, Pinterest, and brought a new generation of supporters to Advancing Justice – Asian Law Caucus.

Evan received his Bachelor’s and Master’s degree in Management Science & Engineering from Stanford University. He was born and raised in San Francisco. 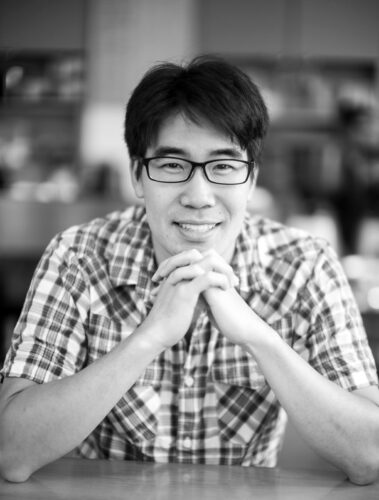 How did you become involved with Advancing Justice – Asian Law Caucus? What drew you to become a major donor?
I was originally introduced to the ALC by my aunt, Marji Fujiki, back in 2009. A year or so later, I joined a subcommittee to assist in the launch of the Korematsu Institute.

I was originally drawn to the ALC because the mission of advancing and representing the civil rights of Asian Pacific Islander immigrant communities has always resonated with me. My mother, who is Chinese, emigrated to the US in the 60s. My father, who is Japanese American, was interned at Gila River in Arizona as an infant by the US Government during WWII as part of Executive Order 9066.

My wife and I choose to be major donors because of the impactful work the organization is doing to address the many challenges immigrant communities still face. It is also important to us that this is an organization with a deep history here in the Bay Area and its impact is felt locally first and then reverberates broadly at a national scale.

What about today’s political climate is most concerning to you?
The current administration’s attitude toward and actions against immigrants and minorities are an alarming reminder that we unfortunately aren’t all too removed from the challenges immigrant communities faced in our nation’s past.

Politically, we are concerned by the increasing partisanship of our country, the lack of accountability of our leaders, the increasing lack of objectives facts and rational discussion and the accelerating erosion of our civic institutions.

What makes you hopeful for the future?
It can be hard at times to be hopeful, but our belief in the innate good in people provides hope that we will somehow swing the pendulum back to a more reasonable state. The dedicated work of the staff of the ALC is one example of how people who want to have a positive difference can swing that pendulum.

What is the most important thing that one of your parents taught you?
My dad has always taught me to give back. He set an example of being a loyal supporter of schools and nonprofits, no matter the amount.