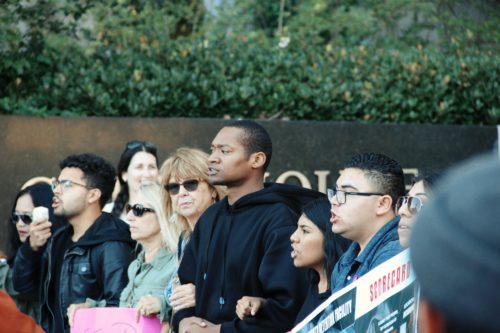 Immigrant communities across California have long fought for more meaningful protections against local and state entanglement with deportations. For years, local law enforcement agencies participated in arresting and detaining immigrants and notifying Immigration and Customs Enforcement (ICE), violating due process rights and ripping families apart. This entanglement meant routine traffic stops or even reporting a crime could quickly turn into a nightmare. Beyond making countless people vulnerable for deportation, this constant threat discouraged families from sending their kids to school, seeking medical care, and accessing justice through our courts.

Following Trump’s election, our Criminal Justice Reform (CJR) team took bold action to protect the millions of undocumented immigrants in our state. We set our sights on a statewide remedy to make California the first “sanctuary state” in the nation. In partnership with California Senate Majority Leader Kevin de Leon and the ICE out of CA Coalition, we launched an ambitious campaign to pass SB 54, also known as the California Values Act.

You’ve likely heard about Attorney General Jeff Sessions’ lawsuit challenging certain parts of SB 54. Despite this lawsuit, SB 54 remain valid and in full effect. We will continue to defend against this lawsuit and any future attacks on the civil liberties of our affected communities.

Over the years, our CJR team has fought to pass, strengthen, and protect sanctuary policies at the local level. Taking lessons learned from these local campaigns, the CJR program collaborated with over fifty immigrant rights, criminal justice, labor, and faith-based organizations throughout California to form the ICE out of CA Coalition, which works towards the passage of state level legislation disentangling local law enforcement from ICE. We also created and manage www.iceoutofca.org, a hub of resources for community members seeking to pass strong local sanctuary policies and implement state immigrant rights laws.

In 2014, after a three-year effort, the ICE out of CA coalition successfully passed the TRUST Act. This state law limits local law enforcement responses to ICE hold requests—requests from ICE asking local agencies to continue holding individuals in custody for immigration enforcement purposes. Two years later, in 2016, the ICE out of CA Coalition successfully advocated for the passage of the TRUTH Act, which requires local law enforcement to provide a written consent form explaining the purpose of interviews with immigrants in custody, that they are voluntary, and that individuals may decline interviews, prior to granting ICE access. The TRUTH Act also requires that local legislative bodies hold an annual community forum regarding ICE entanglement policies and practices if local law enforcement allows ICE access to any individual.

The California Values Act built upon these victories by proposing to further disentangle local and state law enforcement in dozens of ways, including an end to the controversial 287(g) program, prohibiting questions about immigration status, prohibiting arrests for immigration enforcement purposes, and protecting work and home addresses from being released to ICE. It also requires public agencies including hospitals, schools, courthouses, and libraries to adopt model policies limiting assistance with ICE to the fullest extent under federal and state law. These sweeping proposals faced concerted opposition from nativist anti-immigrant groups and a powerful law enforcement lobby, including the California State Sheriff’s Association. The Sacramento Sheriff’s Department even flew the Director of ICE to California to hold a town hall in opposition to the bill.

In the face of this adversity, activists, organizers, and impacted communities rose up to ensure that families are kept together and all people are treated with dignity and compassion. For almost a year, brave immigrants shared their stories of being turned over to ICE by local law enforcement while people across the state rallied, marched, sent letters, and made phone calls. Through a community mobilization campaign, a strong communications strategy, and sustained advocacy and education, we overcame intense opposition to successfully pass the CA Values Act.

The CA Values Act, which went into effect in January, goes a long way in ensuring our state and local resources are not used to fuel mass deportations, and that our schools, hospitals, courthouses, and other public locations are accessible to everyone, no matter their immigration status. The passage of this omnibus immigrant rights law, many years in the making, was a historic victory demonstrating the power of organized communities.

However, much work lies ahead. We are determined to ensure that California continues leading the way in fighting for all of our immigrant communities, setting a strong example for the rest of the country.