Our Voting Rights & Census Program works to expand access to the democratic process for AAPIs and other immigrant communities, limited-English speaking Californians, and all those who have historically been disenfranchised. Our goal is ensuring full participation in not just voting but also census, redistricting, and other democratic systems and institutions that govern the lives of our communities.

Despite progressive voting laws, California does not have a democracy that reflects the diversity of our state. In 2018, 33% of eligible Asian Americans and 36% of eligible Latinos voted. Among all other voters, over 60% voted. We seek a California electorate and democratic institutions that actually look like our state.

Full participation in the census is critically important. An accurate count in the 2020 Census will ensure fair apportionment of federal resources and congressional representation and will be instrumental in the successful enforcement of voting rights statutes.

In 2018-2020, Advancing Justice – ALC will be working with networks throughout the Bay Area and the state to ensure that our communities’ participation is not jeopardized by the climate of fear created by the Trump Administration, by language barriers and the digital divide, and by under-funding. Our primary goal is to provide essential legal, policy, and technical expertise to community-based organizations doing Get-Out-the-Count work in immigrant communities and other hard-to-count communities.

Resources about Census 2020 are available in a wide range of languages at CountUsIn2020.org/resources, a project of the Advancing Justice affiliation.

More information about the 2020 Census can be found in our Census 101 and Census Confidentiality resource videos.

CVRA claim in the City of Sunnyvale

In 2018, Advancing Justice – ALC joined nonprofit organization Asian Law Alliance and the civil rights law firm Goldstein, Borgen, Dardarian & Ho in sending a notice letter to the City of Sunnyvale, CA, alleging that the City’s at-large election system with numbered posts dilutes the voting power of Asian American voters, in violation of the California Voting Rights Act (CVRA). The letter was sent on behalf of four Asian American voters who are residents of Sunnyvale.

The City of Sunnyvale is 45 percent Asian American and 18 percent Latino, but very few Asian Americans or Latinos have ever served on the City Council. Currently, the Council has one Asian American member and zero Latino members. The residents who have filed the notice letter with the City seek a district election system that will ensure all neighborhoods and communities in Sunnyvale are represented on City Council and will lower barriers to running for office for community-backed candidates, low-income candidates, candidates of color, and others.

The City has agreed to place a measure on the March 2020 ballot allowing the voters of Sunnyvale to decide whether the City should shift to a district election system.

Advancing Justice – ALC has supported communities of color and other disenfranchised communities in several jurisdictions undergoing shifts to district elections, even where those shifts did not occur because of a threat of litigation from Advancing Justice – ALC. In the cities of Redwood City, Vallejo, Fremont, and elsewhere, we have provided legal and technical support to community leaders and organizations, explaining how to fight for their interests in a shift to district elections and helping maximize public participation.

Defending the CVRA from constitutional challenge

We are partnering with other civil rights organizations and the State of California to defend the CVRA from a constitutional challenge brought by Ed Blum, the architect of recent challenges to the federal Voting Rights Act and affirmative action, and other conservative activists. We recently won a decisive victory in the Ninth Circuit. Read more here.

Click here for Advancing Justice – ALC’s Guide to Best Practices in Districting. We also have a Guide to Districting Law available upon request.

Every ten years, political boundaries must be redrawn to adjust for population changes.  It is a complex process and many Californians do not know how to provide input on how the boundaries should be drawn. We intend to change that.

Redistricting is especially important for communities of color, because redistricting has historically been used to keep them from power (often known as racial gerrymandering). How and where districts are drawn will often determine if a community can elect representatives of their choice to sit on local school boards, on city councils, in state legislatures, and in Congress. Whether a community is kept whole or split apart by district lines will also determine whether elected officials respond to that community’s needs.

Following the 2010 decennial census, Advancing Justice – ALC participated in a statewide effort with the Coalition of Asian Pacific Americans for Fair Redistricting (CAPAFR) to empower Asian American communities in state and local redistricting. Among other activities, Advancing Justice – ALC brought together diverse communities in Northern California to testify before the California Citizens Redistricting Commission, keeping Daly City whole (instead of split into two legislative districts as was the case in 2001) and ensuring that the Excelsior and Visitacion Valley areas of San Francisco were united with the Bayview, SOMA, and Chinatown in the same Assembly district.

In the 2019 California legislative session, Advancing Justice – ALC worked with a coalition of voting rights advocates to pass Assembly Bill 849 (Bonta), a bill that will reform how local redistricting is governed under state law, with the goal of ensuring public participation in local redistricting and putting guidelines in place that local jurisdictions must follow when drawing lines, to reduce the possibility of gerrymandering.

In 2011, Advancing Justice – ALC joined as co-counsel with the Lawyers Committee for Civil Rights and the firm Arnold & Porter in a lawsuit against the County of San Mateo alleging claims under the California Voting Rights Act. San Mateo was the only county remaining in the state that still used an at-large voting system for County Supervisor seats, which had the effect of diluting minority vote. Over the preceding two decades, the Asian American and Latino communities had grown tremendously but Asian Americans and Latinos had been unable to win Supervisor seats.

The lawsuit successfully brought a CVRA claim against the County, replacing the at-large election system with a by-district election system that increased access to power for communities of color and included a majority-minority Asian American district.

During each election season, the Voting Rights Program prepares a wide range of voting rights and voter engagement resources. In 2018, these included a Know Your Voting Rights fact sheet, a language-access-in-voting fact sheet, a voter education presentation meant for first-time and infrequent voters, a voter registration training, and sample social media. They were produced with the generous support of the Silicon Valley Community Foundation. For those interested in viewing our 2020 resources, please click here.

Language Access in Voting and Poll Monitoring on Election Day

As the state with the most immigrant voters, California has an obligation to be on the cutting edge of ensuring access to the ballot for limited-English proficient voters. We fight for a fully multi-lingual democracy in a variety of ways. Our Voting Rights & Census Program regularly sponsors state legislation that expands the availability of translated voting materials (e.g. AB 918, mentioned below). Together with co-counsel, we recently won (in part) litigation against the State of California that will ensure voting assistance is provided in an expanded range of languages starting in November 2020. Under the ruling from the California Court of Appeal, 14 Asian languages that are not currently covered under state or federal law will now be covered under state law, meaning translated facsimile ballots and other translated voting materials will be available in those languages. Two additional Asian languages that are currently partially covered under the state law will now see expanded language assistance. Read more here.

One additional way we protect access to the ballot for limited-English speaking voters and all historically disenfranchised voters is by operating poll monitoring programs (also known as election observing) during most major California elections. Our poll monitor volunteers visit polling places across Northern California and the Central Valley to ensure that voters receive the language assistance they are guaranteed under both federal and state law, voters are not being intimidated or harassed when voting, polling places are accessible to people with disabilities, and more.

“Voices of Democracy” is the most comprehensive examination ever undertaken of the language assistance available to California’s limited-English proficient voters. It is based on the findings of the nation’s largest field poll monitoring effort in the November 2016 elections, in which 576 volunteers organized by Advancing Justice – ALC and our sister organization Advancing Justice – LA (along with partner organizations) visited almost 1,300 polling places across California to determine compliance with federal and state language access laws.

“Voices of Democracy: The State of Language Access in California’s 2016 Elections.” 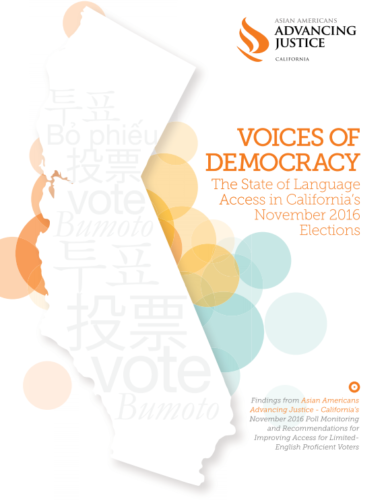 The report’s findings show that the provisions of California state law that at that time were supposed to guarantee translated ballot materials and bilingual poll workers to limited-English proficient voters were both not strong enough and not consistently complied with. The report helped set the stage for the California Voting for All Act (AB 918, Bonta), which Advancing Justice – ALC and Advancing Justice – LA sponsored. It is the strongest state-level language-access-in-elections law in the nation. You can see a fact sheet about AB 918 here.

Advancing Justice – ALC previously monitored hundreds of poll sites in the 2010 and 2012 elections in Bay Area counties and Sacramento County. Our 2012 findings were released in the Section 203 Voices of Democracy 2012 report produced by the Asian Americans Advancing Justice affiliation.

The Voting Rights & Census Program works with elections offices and community leaders in Santa Clara, San Mateo, and Napa Counties on the implementation of the Voter’s Choice Act, a new voting system that, if implemented properly, can increase turnout for all communities and close voter participation disparities. Our program also works with a statewide network of voting rights and civic engagement groups on the Voter’s Choice Act. 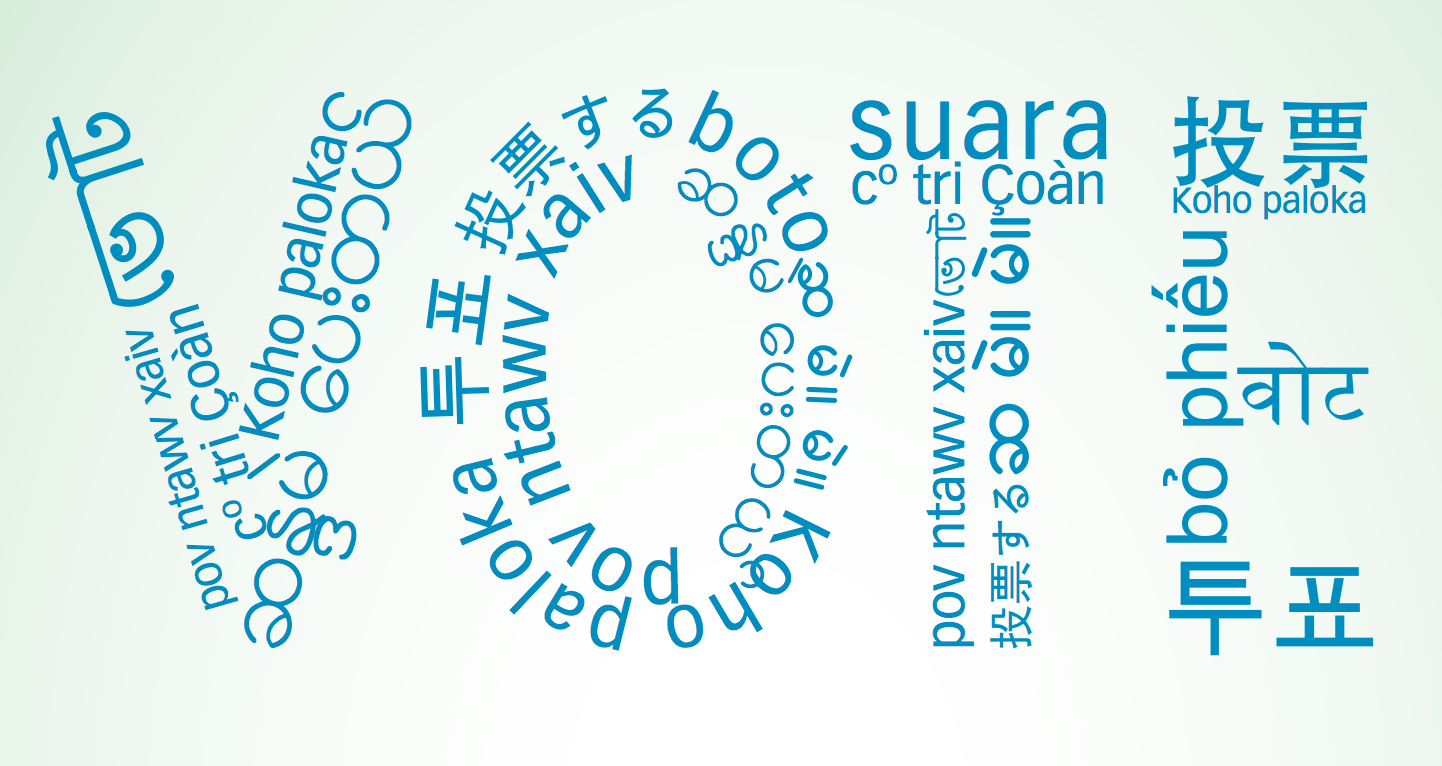 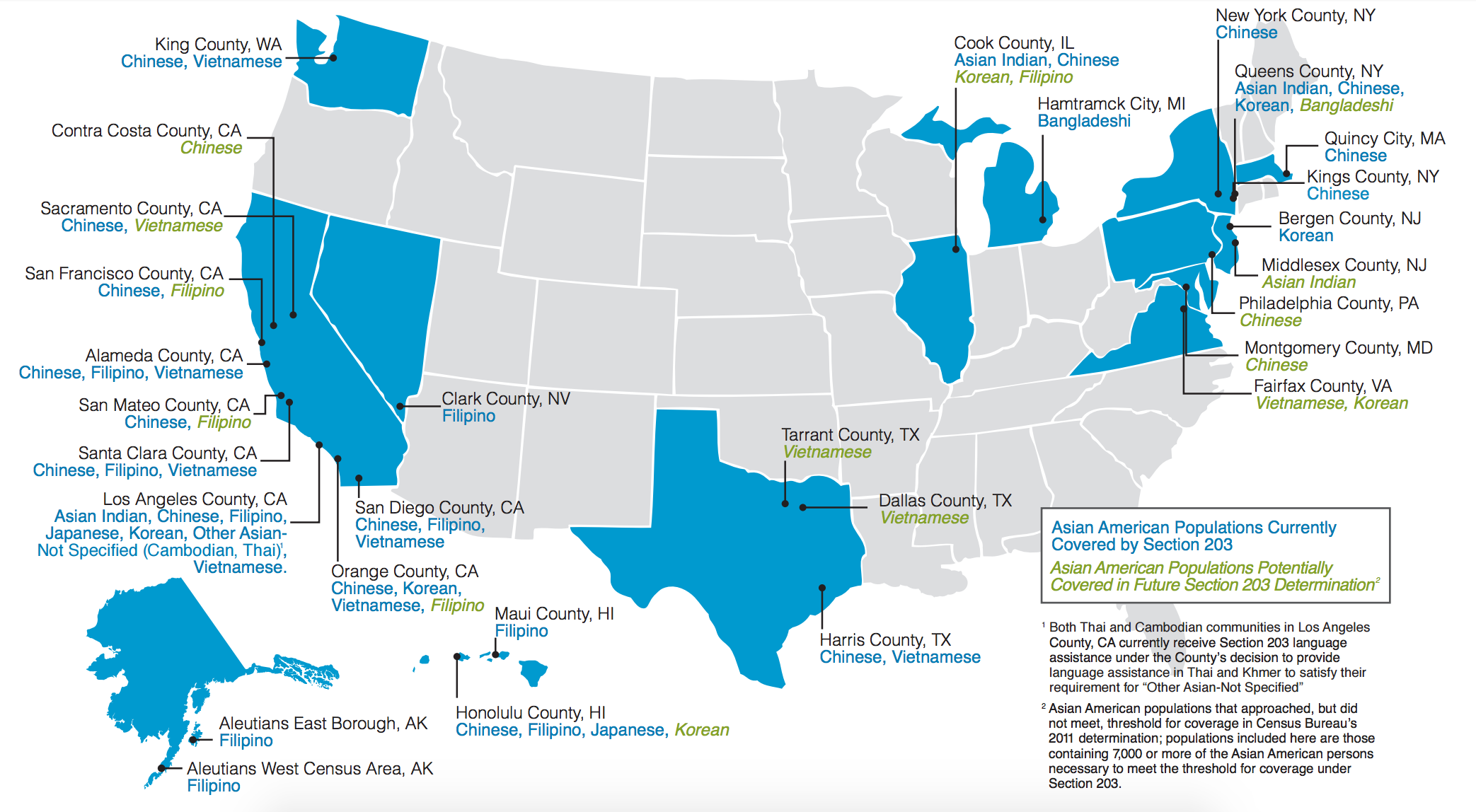 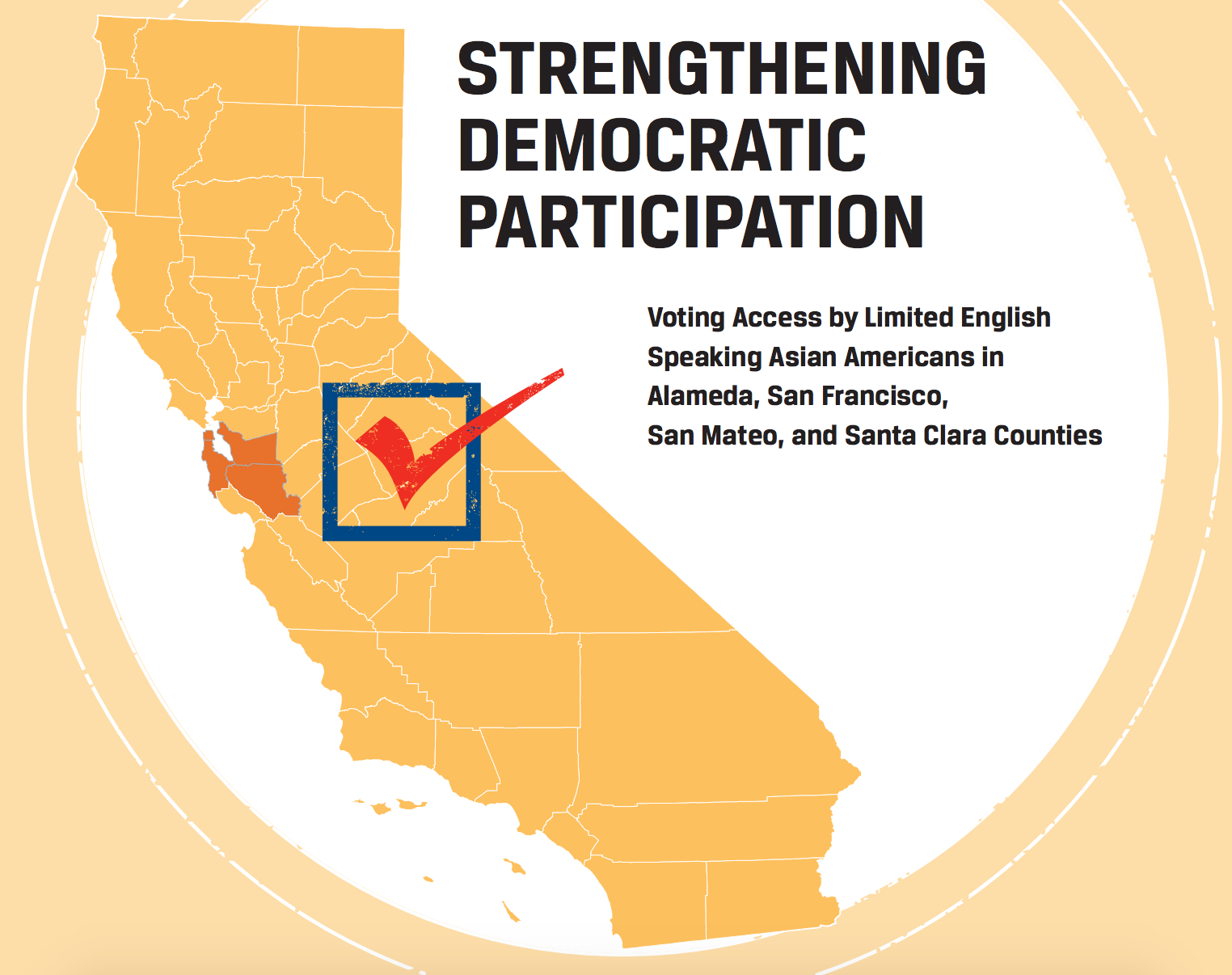 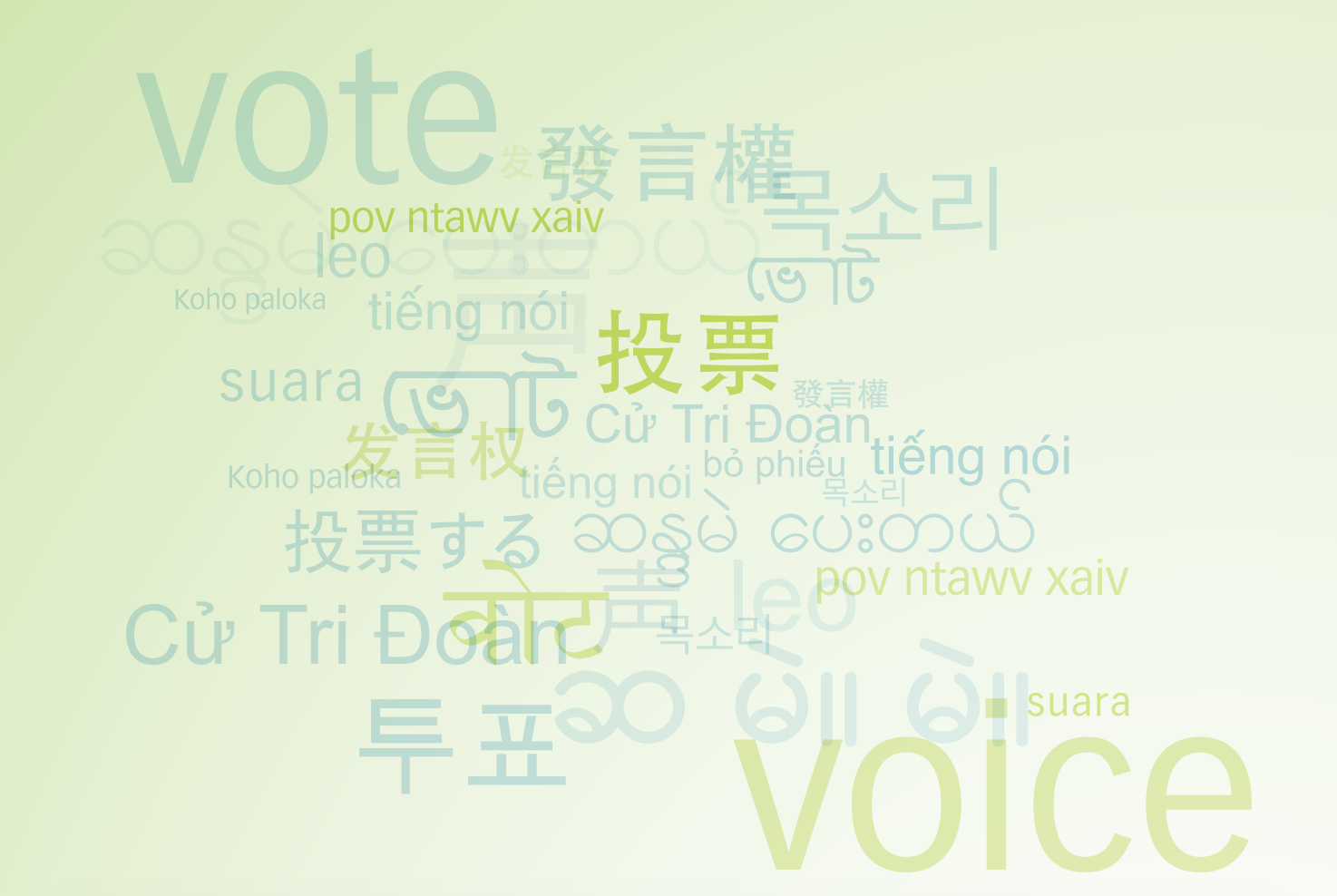 There are no upcoming events for the Voting Rights & Census program.