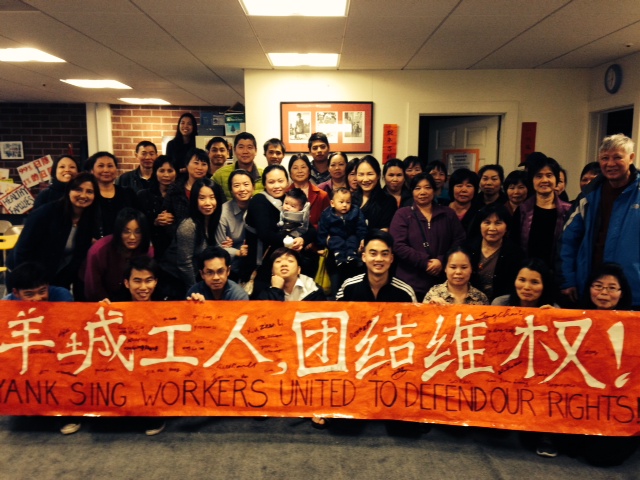 In the fall of 2016, Advancing Justice – Asian Law Caucus filed a wage and hour class action case on behalf of immigrant workers at the popular bay area Burma Superstar restaurant chain.  Shortly before Christmas, workers reported that the employer had distributed and instructed workers to sign documents including mandatory arbitration agreements, meal and rest break waivers, and new I-9 employment verification forms. By signing the forms, workers were arguably giving up important rights in the pending suit.  The employment verification forms also raised the specter of immigration enforcement and threatened to chill workers from assisting with the case.  ALC filed a motion to stop the restaurant’s actions. The judge ruled in the workers’ favor and held that the restaurant’s actions were improper, “threatened serious prejudice” to the workers, and ordered corrective action, including enjoining the restaurant from re-verifying the status of existing employees during the pendency of the suit.  The win shows that workers can fight and win and push back against intimidation and immigration-related threats, even during these hostile times.  The case is ongoing.  Legal Aid at Work and Centro Legal de la Raza are our co-counsel.

Fighting Against Sweatshops on Wheels

Advancing Justice – Asian Law Caucus represented 6 airport shuttle drivers in San Francisco with their wage and hour claims against the shuttle company, American Airporter, and its individual owner. Under the false guise of being independent contractors, the drivers were unlawfully being made to pay for use of company vans, gas, vehicle maintenance, and airport entry fees, even though the van companies they worked for control the fares, customers, routes, schedule, and airport access. Earlier this month, the drivers won an administrative decision upholding the agency’s Bureau of Field Enforcement citations for over $212,000 in unpaid minimum wages, overtime, and meal break premiums payable to six affected drivers, plus penalties. Additional claims are still pending. The decision that calls into question the modus operandi of airport shuttle van companies throughout the state. Read more here.

Advancing Justice – Asian Law Caucus represented 11 residential caregivers in Fresno with their wage and hour claims against their former employer Stephanie Costa and her company Bedford Care Group, Inc. The caregivers had worked around the clock caring for elderly and disabled patients without being properly paid the minimum wage, overtime, or provided the requisite breaks. ALC filed their claims with the California State Labor Commissioner. In December 2014, the workers won an administrative decision upholding the agency’s Bureau of Field Enforcement’s citations for the unpaid wages against both the corporate and individual defendants. The parties later reached a global settlement for over $200k in unpaid wages and attorneys fees for the workers. The settlement left undistributed a useful piece of the administrative decision which applied a three year statute of limitations for unpaid wages under California Labor Code 558, instead of the one year asserted by employers. Read more here.

Advocating for a Filipina Domestic Worker

In November 2015, Advancing Justice – Asian Law Caucus and the Women’s Employment Rights Clinic at GGU Law, filed a complaint in San Francisco Superior Court on behalf of Julieta Yang against her former employers, a high profile couple in San Francisco. Yang worked for the family as a live-in nanny and housekeeper. The complaint alleged that the family failed to pay her minimum wage and overtime for all the hours she worked, and failed to provide her with the proper meal breaks. The complaint also alleged that the husband of the family sexually harassed Yang in violation of both the employment and housing provisions of the state Fair Employment and Housing Act (FEHA). Yang was supported by worker centers, Migrante and the Filipino Community Center, who built a public campaign around Yang’s case in order to highlight the rights of domestic workers and the underreported and serious problem of sexual harassment for domestic workers who are isolated in private homes. The case resolved at the end of the year. Read more here.

On November 19, 2014, ALC announced a landmark settlement for over $4 million in back pay owed to over 280 current and former workers at Yank Sing, an award-winning high-end restaurant in San Francisco.  The settlement was won through a transformative workplace campaign led by a group of nearly 100 cooks, dishwashers, and wait staff at the restaurant.  Despite economic vulnerability and fears of retaliation often faced by low-wage immigrant workers, campaign leaders organized their coworkers to demand workplace changes, with the support of the Chinese Progressive Association and legal representation from ALC.  Because of the strength of the campaign, workers were not only able to win the $4 million in back pay owed to affected workers, but also model employer workplace changes above and beyond what the law requires, including wage increases above the minimum wage, holiday pay, vacation pay, paid health insurance, protected leave to visit family, a workers’ compliance committee, workers’ rights training during paid time, and more.These terms were all agreed to by Yank Sing, who laudably turned its practices around and made the commitment to be a model employer for the industry.The backpay component of the settlement was also made possible with the help and involvement of the California Labor Commissioner’s office and the San Francisco Office of Labor Standards Enforcement. Read more about the case here.

On June 26, 2013, San Mateo Superior Court Judge Marie S. Weiner entered an order granting preliminary approval of a class action settlement reached between current and former employees of the popular San Mateo County based nail salon chain, Natalie Salon, and the owners and operators of the chain. The Asian Law Caucus filed the suit on behalf of a class of approximately 125 current and former salon employees.  Davis Cowell & Bowe, LLP and the Legal Aid Society-Employment Law Center co-counseled the case with ALC.  The complaint alleged that the chain failed to properly pay its employees minimum and overtime wages, took portions of employees’ credit card tips, failed to provide adequate meal breaks, failed to keep proper time and pay records, and unlawfully discriminated against employees by prohibiting them from speaking Vietnamese in the workplace. After the case was filed, Natalie Salon made positive changes to its employment practices and engaged in good-faith efforts to reach a fair resolution of the case.  In addition to paying the $750,000 settlement amount and adjusting its employment practices, the salon has instructed their employees that they may speak Vietnamese at work and will continue to post notices advising employees of their federal and state workplace rights.

On February 15, 2012, Asian Americans Advancing Justice – Asian Law Caucus, Chinese Progressive Association, and Progressive Workers Alliance announced the $316,000 settlement of a major wage theft case in San Francisco, which resolves claims for unpaid wages, tips, meal and rest break premiums filed by eight immigrant workers from a popular restaurant in the Richmond District. This settlement was achieved through a collaborative effort between workers, the state labor commissioner’s office, and legal and community advocates.

You can view our community education resources in various languages here.

You can also find our FAQ on DACA employment and what the announcement of the end to DACA means for you here.

Read our Know your Rights factsheet on Health and Safety during COVID-19.

Why some residential caregivers call their jobs ‘indentured servitude’

In Defense of My Worker’s Rights

Do you have legal questions about your workplace & employment rights? Consultation provided by Advancing Justice – Asian Law Caucus for low-wage workers on work-related problems including unpaid wages, overtime, unemployment insurance benefits, wrongful termination, discrimination/harassment, health and safety, and more. By phone appointment only.

There are no upcoming events for the Workers’ Rights program.